In the era of new mobility, the streets of the future must change 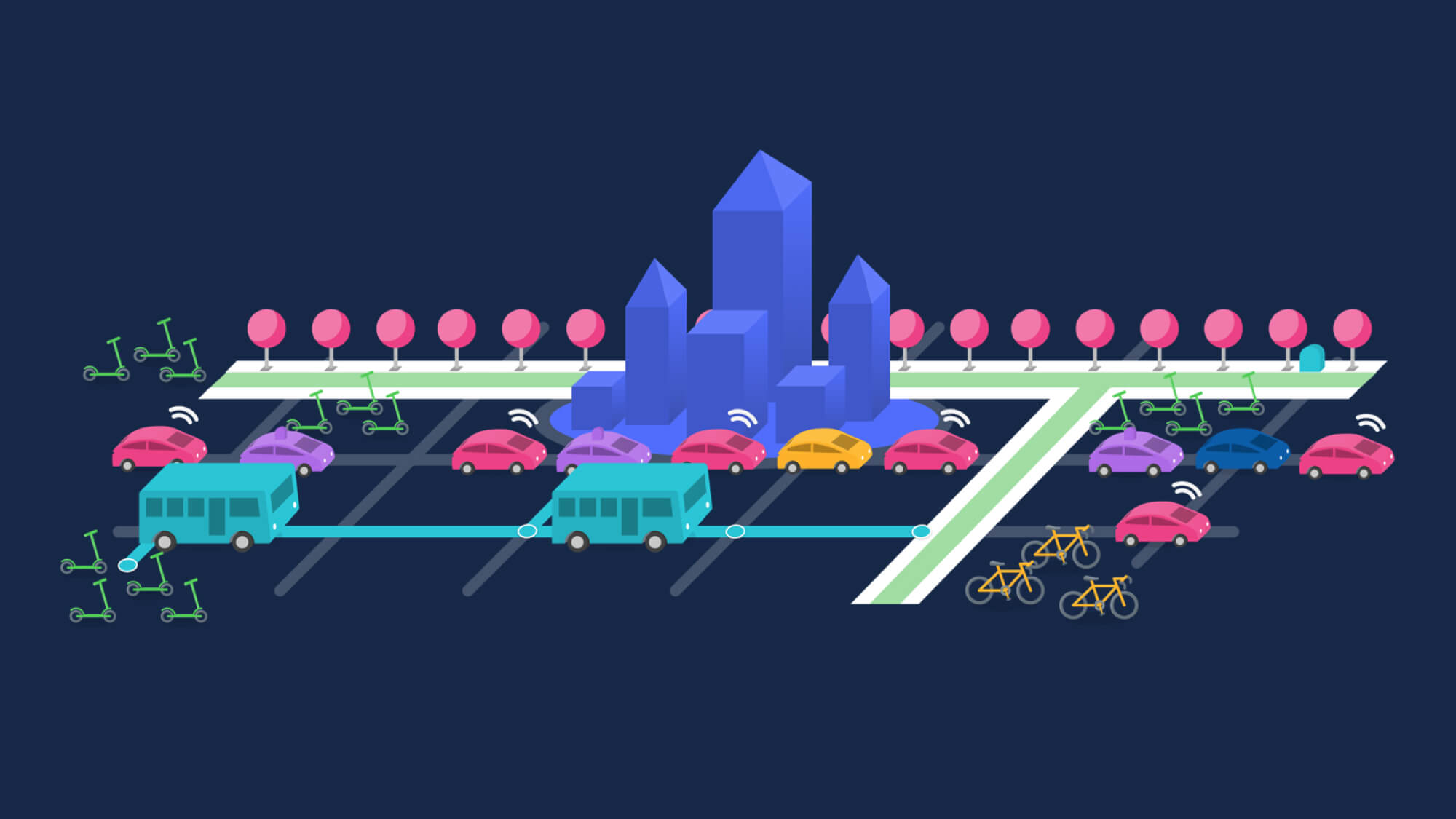 The foundation of cities is our largest public asset: streets. Historically, engineers designed American streets for the efficient (read: fast) movement of goods and cars. Only in the last few years have pioneering cities shifted to ensure pedestrians, bicyclists, and transit riders take priority within the street. Legacy, highway-era infrastructure — designed for unfettered vehicular speed — is now in question.

Today, city planners, urban designers, and engineers are reclaiming this critical public asset to prioritize shared multimodality — that is, making space for people on foot, bikes, scooters, transit, and other ways to get around.‍

Much of this change has come thanks to the work of organizations like the National Association of City Transportation Officials (NACTO) and its advocacy for safer streets, including promoting Vision Zero policies. They took a leading role in taking pilot streets designs of member cities and formalizing it into national best practice. While Vision Zero was adopted nationally in Sweden in 1997, it wasn’t until 2012 that Chicago set the standard for U.S. cities to implement policy around street safety. The reality is that the vast majority of our streets in America are still unsafe to walk and bike along. Safety is just one of the current concerns — the allocation of space itself and future implementation of new technologies is still to come.

The commonality here is that all of these private new mobility options are battling over precious street space. Streets still need to move people, but how those people move on the street will continue to change with each new wave of innovation.

The way we use the street will also continue to morph as more people take to new mobility options. Shared multimodality will highlight the need to reevaluate how space is allocated along the right of way and may include Bird cages, protected cycle tracks, transit lanes, and wider sidewalks.
‍

Cities are reacting. They were caught off-guard by the popularity of private mobility options with Uber and Lyft impacting the curb more than anyone could have expected in 2010. In less than a decade, cities have also had to respond to private shuttle buses, Chariot, Jump, Scoot, Spin, Bird, Lime, and the list goes on. With this latest round of dockless shared vehicles, cities are responding with structured policies and pilots, promoting more data collaboration and partnership benefits for the public sector. But, with each new mobility provider, bigger issues have emerged.

Scooters, for example, have highlighted the glaring lack of quality (and safe) bicycle infrastructure. It has become a focal point in the last few months as electric scooters in the bike lane were exposed to vehicles moving 40 mph. The discomfort of feeling unprotected as a scooter user in a bicycle lane caused even more uproar when some chose to stay on sidewalks, resulting in pedestrian conflicts.

Much of the conflict is happening at the curb. TNCs originally highlighted the importance of the curb — but it’s clear cities need to regulate it in a new way. The sheer number of private and public uses fighting for the same precious space is the new norm:

With the influx of new mobility in the last decade, cities are building policies that help align their street design through space allocation, curb management, and private vehicle restrictions. While one-off policies between two modes are common, a comprehensive approach is still needed given the rising demand and new players.

Cities are at a critical juncture for policy and design

Streets embody the life of cities — the movement yields constant change and growth. And so, our streets should be activated with a diversity of modes, land uses, and activities in order to promote continuous use by people.

How cities work with new mobility providers, the policies they create, and the regulations they enforce will have direct impacts on how people move. These potentially new ways of regulating movement will in turn emphasize necessary changes in street design. But more importantly, these policies should encourage the type of behavior and outcomes a city wants.

People movement on streets should emphasize health, safety, and economic outcomes. If cities are interested in these outcomes for their residents — focusing their efforts on redesigning streets for people is a no-brainer when the opportunities and resources arise.

Cars and people are at odds on our streets. When they collide at high speeds, it results in serious injuries and fatalities for the individuals on foot, bike, or scooter. The impact cannot be understated: the National Highway Traffic Safety Administration reported 5,987 pedestrians and 840 bicyclists died in 2016 as a result of motor vehicle collisions. The faster a car is moving, the higher likelihood that collision results in death — whereas collisions involving a slower moving car may result in injury. The speed at which auto vehicles move is what results in fatalities. Speeding on streets is a reflection of its design, not posted speed limits. By purposefully designing streets for slower speeds, we can promote pedestrian and bicyclist safety to minimize fatalities even if a collision occurs.

Cities must take an active role in designing for the behavior and outcomes they want to promote, and can make a significant impact in reducing fatalities on the street.

Creating walkable and bicycle-friendly streets can play a significant role in individual health outcomes. Streets enable physical activity and a culture of individual movement. Obesity is currently prevalent among nearly 40% of Americans nationwide (roughly 93 million Americans). Not only is the obesity epidemic causing heart disease, diabetes, and some types of cancer — but it costs over $147 billion dollars to treat. Above all, this epidemic disproportionately affects Americans of color and lower-income people.

The health impacts of car commuting also concern us. Road rage is actually negatively connected to our mental health. In fact, a few Canadian surveys that 66% of people walking and biking to work are very satisfied with commutes, despite the length — compared to only 32% of auto drivers.

As a result, public health departments across America have been investing time and resources into making their cities more walkable and bicycle-friendly given its direct ties to improving physical activity and positive health outcomes for their residents.

A number of studies across the country focus on the economic benefits of designing streets for people. Categories include the money residents save by shifting to active transportation and transit modes, increased property values, increased private development, and consumer spending.

Consumer spending is a direct link to promoting active, diverse uses along streets. In Vermont, visiting cyclists spent $13.1 million in vibrant local towns; in New York City, there was a 49% increase in retail sales along a newly minted cycle track corridor along with 172% increase in retail sales adjacent to a new pedestrian plaza; and the University of Washington measured people are willing to pay 11% more for goods in walkable business districts than in auto-oriented business districts. A SFCTA study also measured that transit riders and pedestrians visit retail and recreational corridors with more frequency than auto drivers, and ultimately spend more as well ($252 and $360 per month compared to $208).

A walkable and bicycle-friendly neighborhood promotes lingering and ultimately spending. People-centric streets have positive effects on the local economy.

Streets are laboratories for a diversity of uses, people, and policies. Lab trials must be measured, retested, and adjusted — and so, why wouldn’t we have the same expectation of our streets? We allowed the costly and destructive experimentation of city streets to be commandeered by cars, and now is the time to revisit and adapt them for the betterment of people.

The future of transportation is racing toward us quickly

A city’s streets can help shape that future in a positive or negative way. In the past century, cities have made great advances in transportation but some choices have sacrificed city livability and lives. The past ten years started with an influx of new mobility services (TNCs), followed by a renaissance in bicycling infrastructure, followed by flocks of scooters. This confluence of new modes and data they offer can catalyze a new way of how we think about, manage, and design our city’s greatest public asset.

The difference today is that we have the tools to think dynamically, leverage data, and collaborate digitally across peer cities. Data standards enable a digital understanding of the street, and a canvas to explore change. Remix has always been focused on building better cities and delivering tools to help cities plan their transportation future. Our goal is to elevate awareness around safety, health, and economy to ensure we are measuring what matters, and ultimately deliver outcomes in a city’s best interests.

The way we move in cities is changing, and the streets that support our movements must evolve. In the era of new mobility, we at Remix are ready to help cities plan and visualize the streets of the future with street design software.