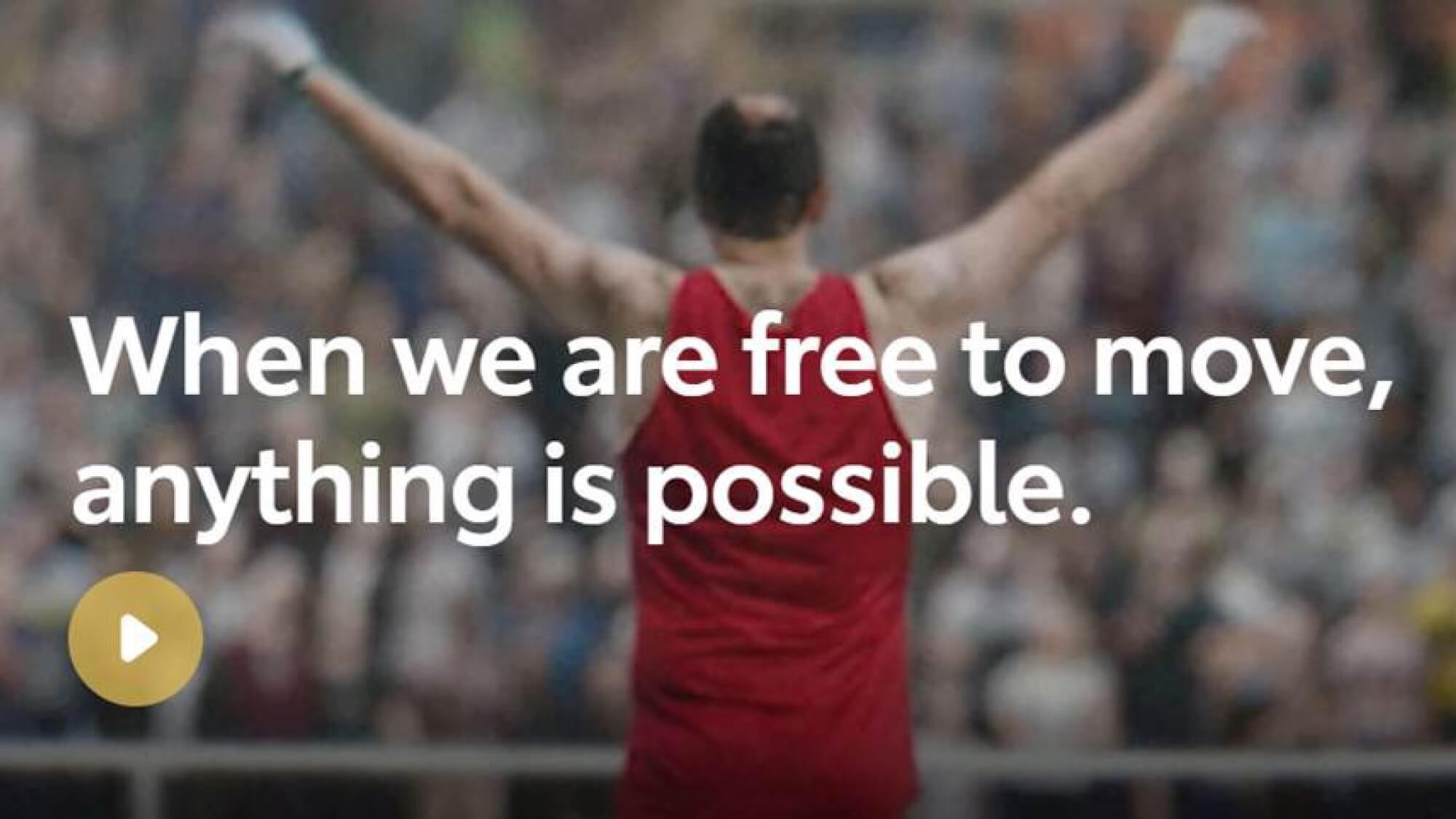 Toyota was the Worldwide Mobility Partner for the Olympic and Paralympic Games. This image was part of the campaign they ran during the 2018 Winter Olympics

Some of you may have watched the recent Winter Olympic Games, during which, Toyota ran several ads highlighting individual mobility. The core message: celebrate the notion of freedom. Yet, absent from these commercials were actual vehicles.

Vehicle manufacturers have long sold themselves as purveyors of freedom. For decades in America, the purchase of a vehicle was not just a financial transaction, but the key to personal freedom. Through their commercial, Toyota was similarly connecting the notion of athletic freedoms to the personal freedoms granted by their vehicles.

On the other hand, public transportation is often portrayed as an alternative to driving, or the option you use when driving is too expensive or unavailable to you. But at its core, there is no difference between the function of a private vehicle and a public transportation vehicle. Both are used to get you from wherever you are to where you want to be.

Willful motion is a basic characteristic of life. Being able to move when you want and go where you want is a core element of personal freedom. In my work as a transit planner, I’ve found that when I am able to describe my work in the context of personal freedom, people engage. I believe that more transit agencies should use this “Freedom Frame” to plan, promote, and communicate their services to showcase the benefit they bring to their communities.

Using such a ‘Freedom Frame’ to talk about our work has several advantages.

Fortunately, there are more and more tools becoming available to transit planners to measure transit freedom. These tools are known as transit accessibility analysis, isochrone analysis, or in the Remix world, Jane. Using Jane to estimate the accessibility for different demographics, such as low-income, minority, youth or seniors, has allowed me to make the transit Freedom Frame relevant to diverse audiences, and gain broad-based support for potential service changes.

Freedom is Greater Than Efficiency

Too often, our conversations about transportation and transit are focused on operational details or efficiency metrics — roadway capacity, vehicle delay, passengers per hour, vehicle loads, etc. But it turns out, that no one really cares about efficiency for efficiency’s sake. In my experience, people care about efficiency only to the extent that it allows them to do something they otherwise would not be able to do. In other words, if we cannot explain our efficiency enhancements in terms of expanded freedom, they will continue to be undervalued or actively resisted.

This reality has implications for both transit planning and marketing. As an example, transfers are essential for an efficient network. However, it’s very difficult for a rider to accept this trade-off and they often resist adding new transfers to a network. You can reduce some of this resistance by illustrating and quantifying the number of new places riders can get to with the new transfer. Mapping one’s transit freedom immediately encourages the public to to imagine new trips they could make rather than focusing on the inconvenience of the transfer.

Freedom as a Business Bottom Line

When marketing to local employers, quantifying the size of the workforce that is accessible to them because of transit speaks to them in terms of their bottom lines. If they can move their workforce on transit, they can rethink their parking strategies and needs. If employers have commute trip reduction goals or targets, for example, marketing transit to their employees starts to be in their own self-interest. In the case of a small business owner, illustrating the number of people who could potentially arrive at their doorstep because of the bus stop could change their perspective. They come to see the bus stop as a virtual on-street parking space that turns over much more frequently than an actual parking spot. Through this lens, they too, have an interest in supporting people using transit.

Another significant challenge in public transportation planning is that we tend to think about travel from our personal experience, which leads to individually optimized solutions. In transit we experience this, when certain customer groups approach us to ask what special service, or route, we can provide for them. Invariably the request stems from the desire to get a certain group or type of person to a specific type of destination to do a specific type of activity. Common examples include seniors getting to the grocery store, youth to a recreational center after school, a certain employer’s employees to their office building, or even concertgoers to a venue.

Approaching transportation from the perspective of the individual requires agencies to know a lot about each individual — where they live, where they’re they going, and when they’re going. Developing highly tailored services around individual trip patterns results in networks that are brittle (fragile to changes in the community) and less efficient. Further, optimizing for an individual will make the network less attractive to everyone but that individual.

To counter this trend, transit agencies need to pivot toward a collective approach. Begin by refocusing on freedom. At the core of each of those individual trips is the same desire, to get from where one is to where one wants to be. Connecting more people to more places more often will result in more seniors, more youth, and more employees reaching their destinations.

If we optimize a network for collective mobility, rather than individual trips, we will have a network that will enhance the individual freedoms for the greatest number of people. Not to mention, the network itself will be more resilient to change, more efficient, and require less specific knowledge about individual trips.

A Willingness to Pay for Freedom

The promise of freedom in transit is primarily sabotaged by its operating budget. The Freedom Frame however, has encouraged me to dramatically expand my vision beyond the limitations of an existing operating budget. We typically think about our current operating budget as the starting point for people’s willingness to pay for transit. For most small and even middle-sized transit agencies, this funding level is insufficient to provide freedom to the general population let alone our current passengers. This lens artificially limits transit’s potential.

I would challenge transit agencies to consider a “Freedom Frame” approach to funding. This changes the question from “How much should we spend on transit?” to “How much should we pay for the freedom to move?” As the automobile industry and Toyota have confirmed, people are willing to pay a lot of money for their personal freedom. Much more, in fact, than any transit agency’s operating budget.

Today, asking people to take transit in the Treasure Valley is like asking them to step out of a world of $1.5 billion of freedom and into a world of only $15 million of freedom. Our residents experience this loss of freedom in terms of the bus not coming often enough, not coming on the days they need, or not taking them to their needed destinations. Understandably, few people, compared to the entire population, choose transit[1].

If people are willing to spend $1.5 billion on their own freedom, why are we limiting ourselves to incremental transit expansion programs? Could transit provide more freedom to more people with less money than the current arrangement?

Of course it can! So, why isn’t that our target? Why aren’t we telling this story in terms of freedom rather than in terms of transportation needs assessments, alternatives, efficiencies, or environmental impacts?

Transit is about providing more freedom to more people at a lower cost. And those costs are not only out-of-pocket financial costs but also lower social costs, lower land requirements, and lower environmental costs. These concepts of transit freedom are not new, but have been elevated through new technology that transit planners now have at their fingertips.

There is truth in Toyota’s advertising: when people are free to move, anything is possible. Whether looking at the past and the tunnels cut by hand through the Rocky Mountains, or the ribbons of asphalt and concrete that crisscross our country, or looking to the future with investments in automated vehicles, Hyperloops, etc., it is clear that anything is possible when you provide people the freedom to move. Transit agencies will be much more likely to realize the investments they need to remain relevant if they are able to tap into people’s desire to move freely.

Stephen Hunt is a Principal Planner at Valley Regional Transit in Boise, ID.

[1] Interestingly, transit’s mode share in the Treasure Valley is between one-half and one percent, which is not that far off from the percent of money spent on transit operations compared to overall transportation “operations.”‍